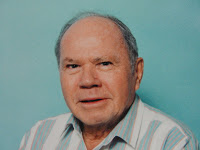 
William L. Page, son of John Samuel, and Ellen Gertrude Firth Page was born March 6, 1925 in Salt Lake City, Utah. He died on September 2, 2012 from causes due to age. Bill honorably served in the US Army for three years during WW2. After the war he joined the Salt Lake City Fire department serving at Station #1 downtown Salt Lake, retiring as Captain of the Sugarhouse Fire Station in 1983. He served for several years on the board of directors of the Salt Lake City Fireman’s Credit Union. Bill enjoyed life, boating, camping and gardening, with family and firemen friends. He is survived by Vickie (Jay) Weyland and Connie (Jason) McClellen, and by a son Ron (Linda) Page along with 9 grandchildren and 11 great grandchildren. He was preceded in death by wife Joan Burt Page, sons Glen and Vern Page, and grandson Eric Weyland. A viewing will be held on September 7, 2012 from 9:00 a.m. to 9:45 a.m. at the Millcreek 2nd Ward (4220 S. 420 E). Graveside services and Interment will be at the Brigham City Cemetery.
To order memorial trees or send flowers to the family in memory of William Page, please visit our flower store.
Send a Sympathy Card