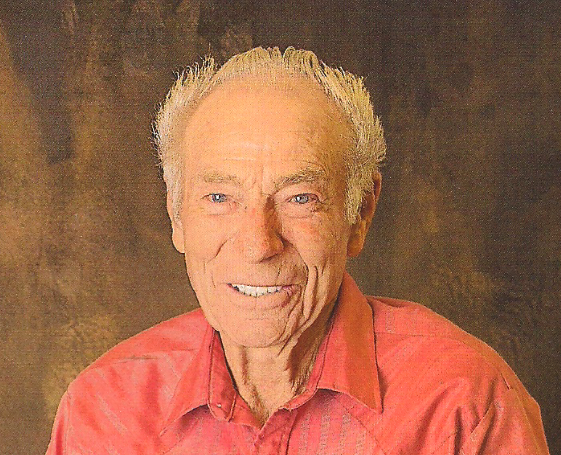 William Earl Harding was born March 13, 1929 to Josiah Frank Harding and Mamie Taylor Harding. They lived in Magna where they owned a dairy farm.  He was the sixth child of eight; John Frank, Shirley Mae, Rebecca, Calvin Taylor, Eva, Delbert Vern and Lucille.
They moved from Magna to Vernon and when he was about 16 years old they bought a ranch in the upper end of Clover.  Here Bill helped with farming and ranching.
October 1950 Bill entered the army where he was stationed in Germany. He was discharged from active duty in October 1952.  He records in his own journal "We were quite a long way out to sea when the Statue of Liberty came into view. That was a very humbling sight. I love this United State of America. I wish all would take care of our flag. It is the symbol of our freedom and people need to respect it better."
On April 5, 1953 he met Lois Harris and they hit it off really well. They were married June 19, 1953 in Lindon, Utah.  They are the parents of 7 children.
On January 9, 1963 Bill and Lois were sealed in the Logan Temple.  Since that time he has actively served in the Church of Jesus Christ of Latter-day Saints in many church callings including Sunday School, Elders Quorum, Executive Secretary to three bishops, and served in the ward and stake Young Men's. His heart was in scouting and he loved to teach about our freedom and the American Flag.  In 1993 Bill was awarded the Silver Beaver Award for Distinguished Service to Boyhood  from the Great Salt Lake Council. His natural abilities have made him an excellent Scoutmaster and a great outdoorsman.
Bill was a wonderful husband, and loving father. He sacrificed much of his time in serving his family and the community. He will be greatly missed by those who knew him.
Bill is survived by his sister Shirley Clausen, his seven children, Mary Norton (Leonard), Erlene Suhr (Mike), Cindy Dye (Shane), Earl Harding (Veronica), Frank Harding (Lisa), Lois Faye Dye (Richard), and William (Bill) Harding (Holli), 35 grandchildren, 96 great-grandchildren and 5 great great grandchildren. He is preceded in death by his loving wife Lois, granddaughter Rachel Stewart and a great-granddaughter Natalie.
Thank you to the Staff at Rocky Mountain Willow Springs Care facility for the superb care that was provided to Bill during his residence the last 2 years.   Also, we would like to express our deepest gratitude to so many nurses, aides and staff members that have special memories and many times you treated Bill as a member of your family.  Your selfless service providing a service to someone that cannot do for themselves is a pure love of Christ.  May God bless you all.  The Harding Family

The Funeral Service will be held at The Church of Jesus Christ of Latter-day Saints, Rush Valley Chapel in Rush Valley, Utah on Thursday, October 10th, 2019 at 11:00 a.m. Friends may meet the family at the Church from 9:30 to 10:30 a.m. prior to the Service. Interment to follow in the Clover Cemetery.

To order memorial trees or send flowers to the family in memory of William Harding, please visit our flower store.
Send a Sympathy Card