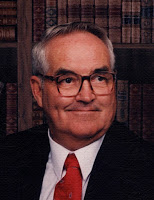 1927 - 2016
Walter Dee Ewell was born in Mammoth, Utah on September 27, 1927. He passed away peacefully in Salt Lake City, Utah on September 20, 2016 at the age of eighty-eight. He married his sweetheart and eternal companion, Florence, for time and all eternity in the Salt Lake Temple on October 16, 1946. His greatest loves were his wife, children, grandchildren, and great-grandchildren; he would light up whenever they were near. A mighty man of faith, he actively served in the Church of Jesus Christ of Latter-Day Saints throughout his life. He especially loved serving as a bishop in West Jordan. Walter was an amazing story teller with a sense of humor that would draw his listeners in as he shared personal experiences from his lifetime. He was an instant friend to those he met. Walter loved people and was able to convey that love in a way that made each person feel valued and special. He was an incredibly hard worker. His entire life he labored with his hands to bless the life of his family. He is survived by his wife of 70 years, Florence, and his children Colleen (David) Anderson, Diane (Mike) Tea, Peggy (Curt) Doman, Pamela (David) Brady, LaMar (Meg) Ewell, James (Julie) Ewell, Robyn Flowers, Tammy (Jeff) Allred, 43 grandchildren, and 90 great-grandchildren. Preceded in death by son-in- law Curt Doman (Peggy) and grandchildren Florence Emma Brady and Luke Harvey Tea. A viewing will be held at the Westbrook chapel (6500 S. Dixie Dr., West Jordan, UT 84084) on Friday, September 23 rd from 6:00-8:00 pm. Funeral services will be held on Saturday, September 24th at 11:00 am at the Westbrook chapel. Interment will be at the Provo City cemetery. Condolences can be expressed at didericksenmemorial.com.

To order memorial trees or send flowers to the family in memory of Walter Ewell, please visit our flower store.
Send a Sympathy Card