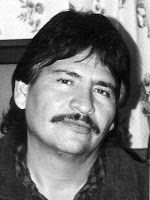 
On February 7, 2010, our Lord and Savior Jesus Christ took our beloved husband, dad, son, brother, grandpa, uncle and friend to Heaven after losing his battle with diabetes and pancreatic cancer. He passed away at home with his family by his side. Victor was born March 30, 1957 to Gilbert and Dorothy Graham in Tooele. He graduated from Tooele High in 1975. On Jan. 14, 1978 he married the love of his life, Pauline Martinez. Together they had three children: Victor, Carla and Brian.

During his lifetime he worked at the Tooele Army Depot, EnergySolutions and Wal-Mart Distribution Center as a mechanic. You would always find Victor helping out one of his “bros,” fixing a vehicle or just about anything they needed his help on. He had many friends, and a fun loving spirit with a heart of gold. He enjoyed camping, fishing, hunting, and watching his favorite football team, the Dallas Cowboys. He took pride in coaching his son Victor in basketball, baseball and football. He bought his son Brian his first guitar when he was eight, and ever since became his son’s biggest fan. He would listen to Brian play the guitar and drums just about every day and he was so proud of him. He especially enjoyed spending quality time with his grandchildren, who were the light of his life and meant the world to him. He was their hero and protector. He was eagerly awaiting the arrival of his second grandson Victor III, due to arrive in April.

One of the meanings to the name “Victor” is “always willing to lend a helping hand,” which fit him perfectly!

Services will be held at St. Marguerite’s Catholic Church located at 15 S. 7th Street. Anyone wishing to convey their sympathy may do so one hour prior to the Holy Rosary. Holy Rosary will be at 7 p.m. Wednesday, Feb. 10. Funeral Mass will be at 11 a.m. on Thursday, Feb. 11. Burial will be at Tooele City Cemetery following the funeral mass. In lieu of flowers, donations for medical and funeral expenses are greatly appreciated and can be made at the HeritageWest Credit Union under “Victor Graham Memorial Fund.” Services entrusted with Didericksen Memorial.

To order memorial trees or send flowers to the family in memory of Victor Graham, please visit our flower store.
Send a Sympathy Card