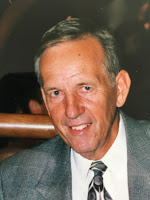 Richard Keel Hutchins ... "Dick"
A man whose heart was pure and without guile.
On a cold, stormy night in Emmett, Idaho, Richard Keel Hutchins was born in his family's home on January 4, 1935 to Elmer and Louva Keel Hutchins. Eighty-one years later on August 1, 2016, he was blessed to also be home surrounded by his family as he passed peacefully into the next life. He patiently battled the effects of Parkinson's Disease for over 17 years. As a young boy, his road led him to Wendover, Utah and then Rush Valley where he lived as a teenager. He was an excellent athlete, playing both basketball and baseball for Tooele High School. He loved those sports so much that he walked home to Rush Valley from practices. Many nights, he walked the whole distance. Some nights, he was lucky enough to hitch a ride. After graduating from Tooele High, he joined the United States Army and was honorably discharged after serving for two years. This time his road led him home to the United States from Germany. He got off the bus at the Blue Bird Confectionery in Grantsville. He met and married Barbara Jefferies, a Grantsville girl, in the Salt Lake Temple on December 7, 1956. The road then led him to Logan where he attended and graduated from Utah State University. In the end, the road led him back to Grantsville where they made their home and raised their three children, Mark, Jeri and Jeff. He was a faithful member of The Church of Jesus Christ of Latter-day Saints and set an example of Christ-like humility. He had the wonderful opportunity to serve in all the organizations of the church, including bishop, where he touched countless lives. Dick loved golf! His children laugh as they remember how they've seen every golf course in every town they've traveled through. For 33 years he loved his job at Hercules. Both of these loves provided him with great friends. Those whose hearts will miss him on this earth will be: the one who calls him "Sweetheart", Bobbie Hutchins, those who call him "Dad": Mark & Tamee Hutchins, Jeri & Kevin Butler, Jeff & Krista Hutchins ... those who call him "Grandpa": Megan, Jacob, Taylor, Lindsay, Ryan, Whitney, Austin, Tyson, Dillon, Tanner, Jackson, their spouses and 17 great-grandchildren. Those who call him "brother": Calvin & Luana Hutchins and Dolores Bracken and of course, the many who call him "friend." Waiting for him in Heaven are his parents, his parents-in-law, Calbert and Chleo Fidler Jefferies and his great-granddaughter, Gracie Hope Critchlow. Funeral services will be held Friday, August 5, 2016 at noon in the Grantsville LDS West Stake Center at 115 E. Cherry Street, Grantsville, UT. There will be a viewing the night before from 6:00-8:00 PM at the same location and again prior to the services from 10:30-11:45 AM. Interment will be at the Grantsville City Cemetery. The family would like to thank Didericksen Memorial and Harmony Hospice for their loving care.
To order memorial trees or send flowers to the family in memory of Richard Hutchins, please visit our flower store.
Send a Sympathy Card