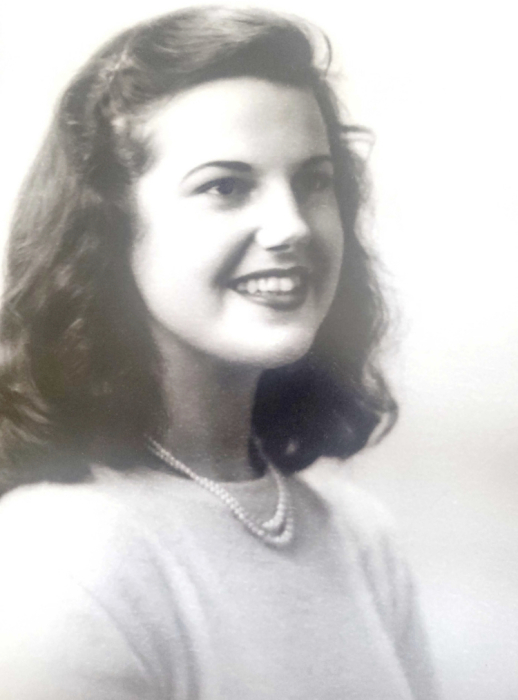 Peggy Gumucio passed away peacefully in her room with her youngest son by her side on the morning of June 15th, 2021 in West Jordan, Utah. A graveside service will be held at the cemetery in Humansville, Missouri on June 30th, 2021 at 10:00 AM.
Peggy was born on May 30th, 1932 in Kansas City, Missouri to Robert Woods Ferril and Amy Rose (Burt) Ferril. She was the second of three daughters: Wanda, her older sister, and Barbara, her younger sister. Peggy's family moved to Columbia, Missouri in 1945, where Peggy attended Jefferson Junior High and Hickman High School. Later in life she would take classes at Brigham Young University in Provo, Utah, where she also tutored BYU students in English and History.
Peggy married Pelayo Roger Gumucio on May 3rd, 1949 and had four children, eleven grandchildren, and 14 great-grandchildren. While her family moved between Missouri and Utah several times, she always considered Blue Springs, Missouri to be “home.”
Peggy was a member of The Church of Jesus Christ of Latter-day Saints, where her family was one of the first LDS families in Columbia, Missouri. She served as Primary (children’s) President and teacher and Relief Society (women’s) teacher, as well as a dance instructor in the Mutual (youth) program. She actively supported and advocated for her children as a PTA President and member. She was also a Red Cross volunteer. Peggy vigorously supported safety concerns in her community of Blue Springs. In particular, she championed sidewalk construction to and from schools, personally overseeing the installation of sidewalks along Vesper Street, R-4 Elementary and the Junior and Senior High Schools.
Ultimately, Peggy would finally settle in Utah in 2002, joining two of her sons, David and Darin. Darin, who called her “Little Britches,” assumed primary responsibility for her health care after she suffered a series of strokes in 2008.
Peggy loved to write and was a gifted poet, with numerous published articles and poems, including many in the Columbia Missourian daily newspaper. She received the prestigious "Famous Poet for 1995" award from the “Famous Poets Society” for her poem “First Love.” She later compiled and published a book of her poetry in 2009 entitled, "Poems and Dreams to Share."
Peggy was preceded in death by her father, Robert Woods Ferril, her mother Amy Rose (Burt) Ferril, her sister Wanda Richardson, and her granddaughter Angelina Gumucio. Peggy is survived by her former husband Pelayo Roger Gumucio and four children and their (spouses), Dante (Cindy Ross) of Orange, CA; David (Kimberly Krogh) of Grantsville, UT; Dina (Craig Petersen) of Thousand Oaks, CA; and Darin (Cheri Munson) of West Jordan, UT, along with each of their families; and by her sister, Barbara (Ferril) Barner of Columbia, Missouri, along with six nieces and nephews.
Peggy will be remembered for her unconditional love and dedication to her children and her unwavering strength, fortitude, and determination, especially during the final years of her life. She had a sharp wit and marvelous sense of humor. Her Witch's Cackle was a Halloween favorite as well as her jolly Ho, Ho, Ho, Santa’s chuckle during the holidays later in life. Peggy also loved music, wind chimes, dancing, nature, animals, birds (especially cardinals), flowers, poetry, holidays, and scripture. Peggy was a patriot, loving people and her country. She was kind, generous and empathetic, with a smile that would light up a room. She loved all things and will be missed beyond measure. Rest well "Little Britches," we will love you forever and always!

To order memorial trees or send flowers to the family in memory of Peggy Gumucio, please visit our flower store.
Send a Sympathy Card