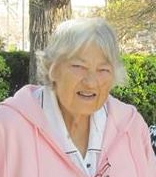 
Merna Joan (Garrard) Walbeck passed away Tuesday April 12th at LDS Hospital in Salt Lake City. Merna was born June 19th 1939 to Mervyn Leslie Garrard & Joan Sarah (Bates) Garrard. Merna was the oldest of three siblings and enjoyed her role as big sister. Merna grew up in Lake Point, Utah and graduated from Tooele High School in 1957. After high school Merna moved to Salt Lake and worked at the church office building. She lived with roommates in Salt Lake. One of those roommates was Carol (Walbeck) Thomas. Carol introduced Merna to her brother Dale and they started dating. Dale and Merna were married on December 28th 1964 in Granger, Utah. They made their home for many years in Rose Park. On September 21st 1969 they were blessed with their first son David Leslie Walbeck. On August 14th 1972 they were blessed with their second son Brian Dale Walbeck. They raised their family in Rose Park. She served in many callings in The Church of Jesus Christ of Latter Day Saints. Her favorite calling was being a primary worker. She was very involved in her son’s lives. She always volunteered at school and even served as the P.T.A. President at Backman Elementary School for a time. She would have done anything for her kids. After her parents passed away, Dale and Merna moved back to Lake Point. She was so happy to be back in Tooele County. She was thrilled when both David and Brian moved to Tooele County to be closer to her and Dale. Merna is survived by her husband of 51 years Howard Dale Walbeck, Sons David Leslie Walbeck (Rebecca) of Lake Point, Brian Dale Walbeck (Becky) of Tooele. Grandchildren Teisha and Emmersen, Brothers Leonard (Colleen) Garrard of Lake Point & Doyle (Diana) Garrard of Lake Point. Also survived by many brothers and sisters in law and many special nieces and nephews. Merna was proceeded in death by her parents Mervyn and Joan Garrard. A viewing and family visitation will be held on Saturday April 16th at 12 noon at the Lake Point LDS Chapel at 1366 Canyon Road in Lake Point, Utah. A memorial service will follow at 1:00 pm. Interment will take place Monday April 18th in the Mt. View Cemetery in Beaver, Utah at noon. Services entrusted with Didericksen Memorial, 435-277-0050.

To order memorial trees or send flowers to the family in memory of Merna Walbeck, please visit our flower store.
Send a Sympathy Card