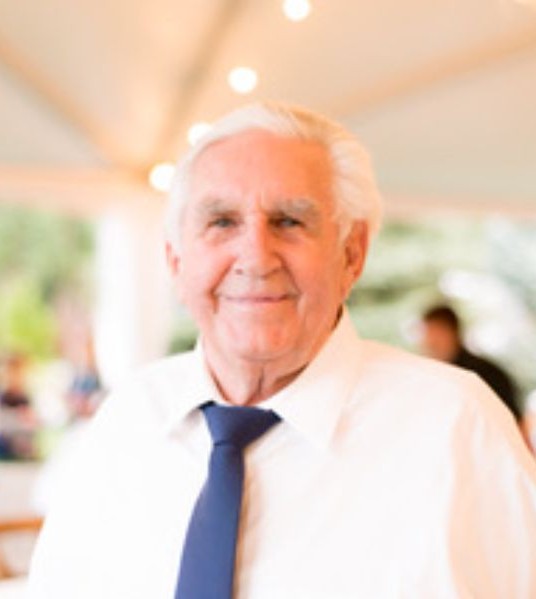 Bert was born on August 27, 1932, in Newark, California, to Maud and Wilford Cole, at the height of the Great Depression. Not long after his birth, the family moved to Grantsville, Utah,where they put down roots. He was an only child.

He grew up in Grantsville and attended the local elementary and middle schools, graduating from Grantsville High School. He had many friends and played countless shenanigans on his teachers and neighbors. He was on the high school football and basketball teams and was voted “best legs” by his graduating class. While a senior, he served as seminary president. He was
a member of the All-Church basketball team which advanced to the state championship in Salt Lake City. On October 12, 1951, a few months after graduation, he married his high school sweetheart, Barbara Peterson, in the Salt Lake Temple. They lived in El Paso, Texas, and Granger, Utah, for a time, but ultimately made their home in Grantsville, where they raised five children: Ed, Dave, Jody, John, and Gemmie.

After high school, Bert was hired at the nearby salt plant, which was a coveted job in Tooele County. He planned to work there for the rest of his life. Those plans changed in 1951, however, when Bert was drafted into the U.S. Army to serve in the Korean War. He and Barbara promptly moved to El Paso, Texas, for his basic training. After completing training, he and two other servicemen were asked to draw straws to see who would be sent to Korea for active combat. Bert drew the short straw, allowing him to remain stateside in El Paso. For the remainder of the war, Bert studied and worked as an electrical engineer. This opportunity changed the course of his life and allowed him to seek a university degree, using the G.I. Bill. (Bert was the first member of his immediate or extended family to attend college.  His five children and wife, Barbara, have subsequently followed in his footsteps.)

Having had electrical experience in the Army, Bert chose to major in Electrical Engineering from the University of Utah. After his graduation with a B.S. degree, he took a position at Hercules Aerospace in Magna, Utah, and worked his way up the ladder to Facilities and Engineering Manager. He was a loyal employee and never worked for any other company, retiring from Hercules in 1990.

Bert loved the people of Grantsville and took an active role in the community. He was Co-Chairman of the Grantsville Sociable, and served two four-year terms as Mayor (1974-1977, and 1998-2001). While serving as Grantsville’s Mayor, he was most proud of founding and sourcing the Grantsville Ambulance service. Over the course of several years, Bert also pursued litigation on behalf of Grantsville City in seeking their due portion of the payout to Tooele Army Depot. He directed these funds to the building of the Grantsville Library. In 2002, after completing his second term as Mayor, Bert was honored to receive a prestigious Community Leader award from Grantsville City for his excellent service.

One of his favorite pastimes was to work at the family farm in the evenings following a full day of work at Hercules. Bert loved his cows and would name them. If you went to the farm with him, he would point out each cow and tell you about their personalities and characteristics as if they were human. He could toss and stack hay bales with the best of them. He was a master Dutch oven chef, to the delight of his family and friends. To stay busy after retirement, Bert grew delicious, sweet corn and potatoes with his friend, Dave Stangler, which produce they offered up for sale at the local market. Growing up in the Depression era made him resourceful. Bert was able to repair cars and appliances and plant a garden. His favorite treat was to pick a fresh ripe tomato from the garden and eat it on the spot like an apple.

Bert was a lifelong member of the Church of Jesus Christ of Latter-day Saints, and actively served in many positions, including serving as a Gospel Doctrine teacher, a Counselor in the 5th Ward Bishopric, and a Counselor in the Grantsville West Stake presidency (for 10 years). He particularly enjoyed his assignment serving with the Saints in Wendover and Ibapah.

In 2003-2004, he served a full-time mission with his wife, Barbara, in the St. George Historic Sights Mission, which they thoroughly enjoyed and during this assignment, they made many friends. Bert’s “acting career” began and ended with his signature role as Brigham Young, performing for several years in “St. George Live.”

Within a few short months after returning from their mission in St. George, Barbara became ill and passed away in May of 2004. At the time of her passing, Bert and Barb had been married for 53 years.

Several years after Barb’s passing, Bert was blessed to become acquainted with Karen Armstrong, who was also a Grantsville girl. After a year-long courtship, they married in May of 2009. They made their home in Santa Clara, Utah, and they enjoyed 13 years together.

Bert was steady, solid, and dedicated to things which matter most. He adored being with his many friends and family members. As a man of duty and honor, he served his family, his church, and his community. He was greatly loved and will be deeply missed.

Funeral services will be held Saturday, June 25, 2022, at 1:00 p.m., at the Hale Street Ward building of The Church of Jesus Christ of Latter-day Saints: 428 S. Hale Street, Grantsville, Utah. A viewing will precede the service from 11:30 a.m. to 12:45 p.m. Interment at Grantsville City Cemetery.

To view the services live, click on the link below:

For those living in the St. George area, where Bert resided for the past 17 years, an additional Memorial Service will be held on Saturday, July 9, at 12:00 noon, at the Santa Clara Ward building of The Church of Jesus Christ of Latter-day Saints: 3815 Rachel Drive, Santa Clara, Utah.

To order memorial trees or send flowers to the family in memory of Merle (Bert) Edward Cole, please visit our flower store.
Send a Sympathy Card