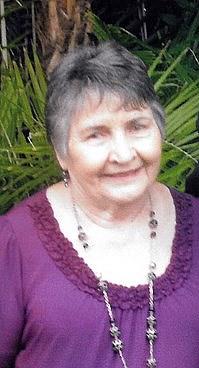 
On Tuesday, January 30, 2018, Ann Moser passed away at the young age of 82 due to a sudden and brief illness, and now continues on in her eternal progress in peace. She was a resident of Ventura for the past 53 years. Ann was born on July 9, 1935 as Margaret Ann Russell in the town of St. John, Utah (later named "Rush Valley" adjacent to Tooele). Ann was the youngest of six children born to Martell and Margaret "Maggie" Russell. Ann was the only daughter and she has five older brothers Bill, Calvin, Dan, LaMar, and Melvin.

Our mother inherited an enduring resilience and capacity to work due to her farm girl childhood, and she applied her positive attitude to her endless motherly tasks of caring for her eight children and many grandchildren. Ann attended Tooele High School and is remembered as its 1953 prom queen. She continued her education attending Utah State University and Brigham Young University and majored in secretarial training. Her 60 year marriage to Jack E. Moser, D.D.S. began on June 20, 1958 in the Salt Lake City Temple. While her husband was completing his dental school degree at Georgetown University in Washington D.C., Ann bore two sons and also worked as the executive secretary for Senator W. F. Bennett (UT).

As a wife, mother, grandmother, and great-grandmother, Ann is known for her tender heart and caring demeanor for every family member, which was centered in her faith, hope, and charity in Christ. In addition to her family responsibilities, Ann served in various church callings throughout her life in The Church of Jesus Christ of Latter-day Saints, and shared her musical ability of playing the piano during church services for many years. She also enjoyed working in the Los Angeles Temple with her husband on a weekly basis. Ann was the type of person who never met a stranger and always had a twinkle in her eyes.

Visitation will be held in the Relief Society Room from 9:00am until 9:50am on Tuesday, February 27, 2018, at The Church of Jesus Christ of Latter-day Saints, 3501 Loma Vista Rd., Ventura, CA. Funeral services will begin at 10:00am. Interment will be at the Tooele City Cemetery at a later date.

To order memorial trees or send flowers to the family in memory of Margaret Moser, please visit our flower store.
Send a Sympathy Card