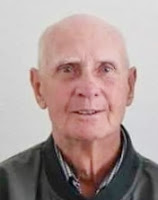 LG Cummins, 86, passed away on the 18th of October 2015. LG was born in Navasota, Texas to George Washington and Sally Mixon. He married Bertha Nay on the 18th of August 1984 in Roy, Utah. The marriage was later solemnized in the Salt Lake Temple. LG served two years in the Army during the Korean War from 1951 to 1953. He received his Bachelor's Degree from BYU and later, a Master's Degree in Education Administration from the University of Utah. He taught elementary school at Central School and West Elementary in Tooele, Utah, and he retired in 1987. He continued to work as a substitute teacher for several years afterward. He is survived by his wife Bertha, sons Gregg (Brittney), Mason (Denise), Landon (Lindsey) Cummins, daughter Sarah (Levi) Frampton, and one brother Weyland (Bobbi) Cummins. He is preceded in death by his parents George Washington and Sally Mixon, brothers George, Leslie, Lester “Shorty”, Carl, Donald, Vernon, Maurice, Aubrey, Boyce, Boyd, Russell, and sisters Adeline and Dorothy. We would like to thank the staff at the Magnolia House and Harmony Home Health Care for their care and service. Visitation for friends and family will be Friday, 23rd of October from 10 a.m. - 11:30 a.m. at the LDS Chapel on 180 South Coleman. The Funeral Service will begin at 12 noon at the same location. The burial will be at the Tooele City Cemetery. Services entrusted with Didericksen Memorial, 435-277-0050.

To order memorial trees or send flowers to the family in memory of LG Cummins, please visit our flower store.
Send a Sympathy Card