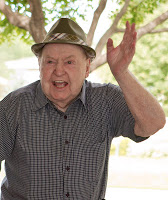 
1924-2013. Vern Brown 88, passed away on January 30, 2013 from natural causes incident to age. Vern was born August 10, 1924 in Grantsville, Utah to Joseph Leishman and Mary Toone Brown. Vern was the sixth of nine children. He is survived by one sister, Gayle Buckwalter. Vern graduated from Grantville High in 1942. He joined the Navy in 1943 and met his wife to be, Alda Marie Phister, in Oakland California at a U.S.O. dance. They were married in the Salt Lake Temple on January 24th 1945. Vern served a mission to the New England states during the first years of their marriage. Vern and Alda were blessed with ten children: Larry (Elizabeth Low), Jeffrey (Gloria Revill), Randall (Cheryl Williams), Roger (Carol Ann Hinds), Darlene (Richard Lamplugh), Darrell (Holly Anderson), Loren (Danell Paskett), Kevin (Kim Early), April (Brett Wallace), Sheryl (Alan Walker). Alda passed away on October 17, 1987 from cancer. Just prior to her passing, Vern and Alda served a mission to Birmingham Alabama. He married LaRue Hale Soelberg on October 14th 1989. Vern loved LaRue's eight children: Jean Didericksen (Paul), Carol Jefferies (David), Scott Soelberg (Shelly), Jay Soelberg (Julee), Laurie Green (David), Kaye Stice (Jim), Lisa Droubay (Mark), Mark Soelberg (Allison). Together, they loved each other's family in amazing ways. Their combined posterity is now over 200 and growing. Vern and LaRue served missions to New York City and Sidney Australia. He worked in sales most of his life, primarily at Granite Furniture, he loved to meet and greet people. Vern was called to be bishop of the Liberty 2nd Ward in 1958 at the age of 34. Vern had a special love for missionary work as evident in the 4 missions he served during his lifetime. Vern's parting message to his family is: " I love you and I'm so proud you - you are my greatest blessing." Services will be held at the Orem Park 4th Ward located at 725 West Center Street Orem, Utah on Monday February 4th. The funeral will begin at 11:00am and there will be a viewing at 9:00am prior to the service. Interment at the Larkin Sunset Lawn at 2350 E. 1300 S. Salt Lake City, Utah. Services entrusted with Didericksen Memorial 435-277-0050.
To order memorial trees or send flowers to the family in memory of LaVern Brown, please visit our flower store.
Send a Sympathy Card