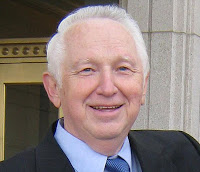 Kenneth Wayne Scott
Kenneth Wayne Scott, 75, passed away peacefully March 25 in Tooele, UT after a courageous eleven-year battle with Alzheimer’s. Beloved by all who knew him, he lived a life of perfect integrity, unquenchable optimism, and Christ-centered service. Wayne was born November 6, 1936 in Washington, D.C. to Kenneth LeRoy and Mary Eliza Whittle Scott, the fourth of five sons. His early years consisted of taking music lessons, making things in the family wood shop, entertaining friends, and working on the family farm. His parents taught him the value of hard work, entrepreneurship, and deep spiritual values.
He developed his musical and artistic gifts at an early age, playing a trombone duet with Tommy Dorsey (a famous band leader of his day), playing in a dance band, and creating his own cartoon strips, simple sketches, wood carvings and wood shop projects. He continued to nurture these artistic abilities and used them to earn his Bachelor of Fine Arts degree in Industrial Design at the University of Kansas.
After graduation and completing basic training for the United States Air Force, he married Ann Bassett on November 20, 1961 in the Salt Lake Temple for time and eternity. Together, they raised five daughters and one son and were uncommonly dedicated, creative, and compassionate parents. He earned his Master of Science in Education degree from the State University of New York while being a very attentive father.
Wayne served in many capacities for the LDS church. He took every opportunity to share his testimony of the restored gospel of Jesus Christ, contributing significantly to the church’s missionary effort. Because he was a regional Public Communications Director in the nation’s capital at historic times, he played an important part in America’s Bicentennial Celebration and in the dedication of the Washington, D.C. temple.
He and Ann founded The American Family Society, a nonprofit organization to help strengthen families, and dedicated the majority of his career to this cause. Through this organization, he was involved in many singular experiences. He helped produce television and radio shows. His writings were published in national magazines and in local and national newspapers. He was interviewed on many talk shows, including a national network television show, “The Today Show”, and was a guest speaker at meetings and conventions, presenting at a number of workshops. He provided family-building resources and ideas to over a million families in the United States and in some foreign countries through The Million Dollar Round Table and the United States military. Through all this, he associated with US Presidents, heads of major organizations, celebrities, and other notable people, yet he always remained characteristically humble and focused on serving others.
During the last eleven years of his life, he remained cheerful, kind and courageous, while Ann loyally shouldered the increasingly difficult responsibility of caregiving with poise and remarkable strength. Their family is deeply indebted to the members of the Millpond ward, to Tracey Ridley (hospice), and to Mary and John Pitt, who cared for Wayne during his last month on Earth.
He will be remembered with deep love for his thoughtful, compassionate, and upbeat nature, his enthusiasm in sharing the gospel and promoting the well-being of families, his sense of humor, his love of art and music, and for his unwavering devotion to the Lord.
Wayne is survived by his wife of fifty years, Ann Bassett Scott, children Shannon Jensen (Kim), Cathie Frost (Rick), Andrew Scott (Vicki), Lorraine States (David), Kim Meyers (Carl) and Carrie Scott; twenty-two grandchildren; one great-grandchild and one on the way; brothers Gerald, Richard, Walter and Mitch; and many nephews and nieces.
Wayne’s funeral will take place Monday morning, April 2nd, at 11 am at a local meetinghouse, 417 E Benson Rd, Stansbury Park, UT. There will be a viewing in the ward building from 6-8 pm on Sunday evening and at 10 am before the funeral. The internment will take place in the afternoon at Wasatch Lawn Memorial Park in Salt Lake City. In lieu of flowers, the family requests that memorial contributions be sent to the LDS Humanitarian Fund (give.LDS.org/memory ).

To order memorial trees or send flowers to the family in memory of Kenneth Scott, please visit our flower store.
Send a Sympathy Card