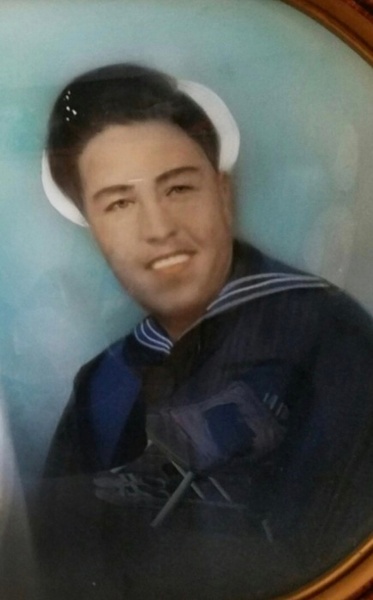 Our Dad and Grandpa Jose Francisco Gonzales was called to our Heavenly Father on March 9, 2019, with the guidance of his wife Margaret, daughters Juanita and Peggy and brothers Pat, Manuel and Ted and into the arms of his parents Elizardo and Juanita Gonzales.

He proudly served his country during World War II in the Navy and received the Victory Medal.

He married Margaret Trujillo on April 30, 1947. She preceded him in death on March 6, 2002. She was always in his thoughts, prayers and especially in his heart. He was a faithful member of St. Marguerites Catholic Church. He was employed at Tooele Army Depot as a Millwright and retired in 1982 after 36 years of service.

Dad Loved camping, hunting, fishing and his trips to Wendover, also an occasional BBQ with the Familia. He was an avid Denver Broncos and Utah Jazz fan.
He also loved the lord of a different kind, LORD CALVERT. Boy did he enjoy that shot of the Lord. We will miss those days.

We would like to thank Rocky Mountain Willow Springs for the loving care they gave to Dad.

To order memorial trees or send flowers to the family in memory of Jose Gonzales, please visit our flower store.
Send a Sympathy Card