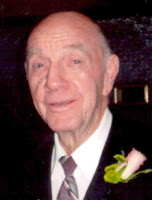 Jethro (Jeff) S. Worthington
Jethro (Jeff) S. Worthington 86, of Grantsville, returned home to be with his beloved wife Mary and daughter Peggy, November 28, 2011. He was born at his home in Grantsville on December 12, 1924 to James Stanley and Chloe Rydalch Worthington. He was the second to youngest out of nine children and was the last surviving of his siblings. On March 30, 1945, he married Mary Hale and later their marriage was solemnized in the Salt Lake LDS Temple. They were blessed with six children. He was a heavy equipment operator for the Tooele Army Depot. He was a professional firefighter stationed at the Wendover air force base and one of the founding members of Grantsville’s volunteer fire department. He later became one of their fire chiefs. Jeff was also a cattle rancher. He was passionate about riding horses and chasing cows. He loved to hunt and fish. His greatest pride and joy, though, was the time he spent with his family. He was everyone’s caregiver, especially to his loving wife and daughter. He was an active and devout member of the LDS church, where he held many positions throughout his life. He is survived by five of his children; Gary (Colleen) Worthington of Lindon, Randy (Maureen) Worthington of Pleasant Grove, Marion (Dennis) Wright of Hurricane, Connie (Fred) Killpack of Grantsville, and Jeff (Lori) Worthington of St. George. He has 19 grandchildren and many great grandchildren. “We will miss you Grandpa.” Funeral services will be held at 12 p.m. on Saturday, December 3, 2011 at the Grantsville West Stake Center, 115 East Cherry Street. A viewing will be held one hour prior to the funeral. We wish to extend a special thanks to the Harmony Home Health & Hospice team that helped us to care for our loving father and grandfather. In lieu of flowers, donations can be made at City Hall to the Grantsville Volunteer Fire Department.

To order memorial trees or send flowers to the family in memory of Jethro Worthington, please visit our flower store.
Send a Sympathy Card