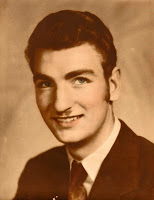 Ernest (Ernie) Broadbent
1928-2012. In the early morning of March 05, 2012 the Lord called for Ernest (Ernie) Broadbent to come back into his arms. He was the son of Francis Haslam Broadbent and Amelia Roake Millward. In passing he was fortunate enough to say his last goodbye to the people closest to him. He married Delores Ruth Hammond on April 14, 1950. The marriage was later solemnized in the Salt Lake Temple on June 18, 1957. He was a beloved father, family man and friend. He was known by all for his “Jack of all Trades” handyman abilities and wood working skills. He was employed by Tooele Army Depot and retired in 1975. He later gained employment with the UNOCAL 76 Truck Stop in Lakepoint and worked there until 1989. Ernie was an active member of the LDS church serving in the Sunday School Presidency, The Ward Mission Leader, and The Secretary of the High Priest Group. He is survived by his loving wife Delores, his son Richard (Cindy) Broadbent, his lovely four daughters; Joyce (Blaine) Fawson, Bobbi (Robert) Weyland, Sheryl (Robert) Prier, Kathy (Dave) Keate, his sister Dorothy Blair, 16 grandchildren, 33 great-grandchildren and 4 great-great grandchildren. Ernie was proceeded in death by his parents, brothers Delmar and Lamar (Tom), his granddaughter Jenny Lynn Prier Dadey; and great granddaughter Tasha Keate. He will be missed tremendously by his family. Funeral services will be held Thursday March 08, 2012 at the Grantsville 12th Ward (428 So. Hale, Grantsville, Utah) at 12:00pm. A viewing will be held prior to the funeral service from 10:00am to 11:30am. Internment will be at the Grantsville City Cemetery.

To order memorial trees or send flowers to the family in memory of Ernest Broadbent, please visit our flower store.
Send a Sympathy Card