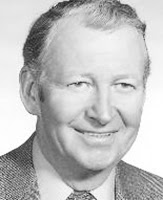 Edward H. McBride
Dr. Edward H. (Ted) McBride of Alameda, Calif., passed away after a short illness at the age of 93. He was born in Grantsville to A. Clarence and M. Myrtle McBride. Following high school graduation in 1936 he re-located to Alameda where he worked and attended college. In 1941 he was drafted into military service and assigned to pilot training in the Army Air Corps. Upon completion of pilot training in 1943 Lt. McBride married...
Marjorie Aldous of Tooele. Subsequently, he piloted 40 B-24 bombing missions over some of the most dangerous targets in the Pacific Arena, 25 as squadron leader. Despite performing sorties at 1,500 feet over Iwo Jima and being shot down two times over this venue — once landing safely with three of the four engines knocked out — his crew did not suffer any loss of life or injury. Lt. McBride piloted the first four engine plane to land on Guam following its re-capture. For saving the lives of his crew members and striking targets accurately at low elevation he received two Distinguished Flying Crosses, one Air Medal with six Oak Leaf Clusters and a Presidential Citation. After the war he returned to school and received his dental degree in 1949 from the College of Physicians and Surgeons, now UOP Dental School in San Francisco. With his skill as a dentist combined with his charm and ability to put people at ease he soon built a highly successful dental practice in Alameda before retiring in 1985. Ted gave back to the community through volunteer work with Meals on Wheels and other community organizations. He served as a director of the Alameda Chamber of Commerce, Alameda Boys and Girls Clubs and was a longtime member of the Alameda Kiwanis and Elks clubs. Ted was active in the East Bay Dental Society and served as President of the Alameda Dental Society and the University of the Pacific Study Guild.

Part of Ted’s charm was that he loved people and was never shy about conversing with anyone. This included larger than life figures such as Admiral Chester W. Nimitz to whom he complained to in person that the Navy was enjoying steak and ice cream while Army Air Corp personnel were eating K-rations. The Army Air Corp had better food the following day and consequently he was admired by the troops. As a result of this relationship, many years later he was able to have the Admiral speak at Kiwanis.

Ted was a follower of Bay Area sports teams, most notably the San Francisco Giants and 49ers for whom he was a season ticket holder for over 60 years. During the 1980s he served as the on-call dentist for 49er home games. In 2007, on his 90th birthday, the 49ers hosted Ted for a special day at training camp.

Dr. McBride, known to his friends as Ted or Doc, was well loved and respected by all in the community as a caring — giving individual and will be greatly missed.

A service will be held at 11 a.m. on Saturday, Oct. 2 at The Church of Jesus Christ of Latter-day Saints, 1201 Grand St. Alameda, Calif. Burial with military honors will take place in the Grantsville Cemetery on Monday, Oct. 4.

To order memorial trees or send flowers to the family in memory of Edward McBride, please visit our flower store.
Send a Sympathy Card