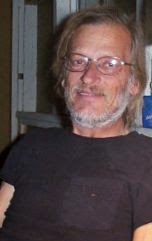 1955 - 2015
Dan Pratt, 59, passed away in his home on April 22nd with his wife and step-son by his side. Frank was born May 31, 1955 to Frank Thaddeus Pratt, Jr. and Elizabeth Walker in Tulsa, Oklahoma. His parents named him Frank Daniel Pratt but he always preferred to be called Dan (never Danny). He grew up in California, where he was a Sea Scout and master diver. He loved to sail out to Catalina Island to dive, logging hundreds of hours in the Pacific Ocean and teaching diving classes. Dan was a buyer for various space missions, including the space shuttle and various satellites. Later in life he found a career that he loved as a locksmith. He eventually owned his own business and opened a lock shop with his second wife, Maggie, who he married March 31, 2001 while on vacation at Disneyland. He was also a volunteer EMT-IV and an amateur radio operator with the call-sign KD7BEO. Dan loved food and enjoyed trying a new restaurant with his daughter every Saturday evening for years, always saying, "eat dessert first, you might choke on your steak." He enjoyed taking drives with his wife just to enjoy the scenery and the quiet of the outdoors. He is now reunited with his parents; stepmother, Alma Pratt; and his favorite cat, Madame. He is survived by his wife, Maggie Norton-Pratt; daughter, Cori (Pratt) Rozentals; stepchildren, George Norton and Carrie Nicholes; and 2 grandchildren. His ashes will be spread off the Oregon coast by his wife and in the Bahamas by his daughter so that he has a choice of oceans and great diving. Services to be held on May 9th at 2:00 pm at the LDS church located at 132 N 570 E, Tooele. In lieu of flowers, please consider the needs of the family.

To order memorial trees or send flowers to the family in memory of Dan Pratt, please visit our flower store.
Send a Sympathy Card