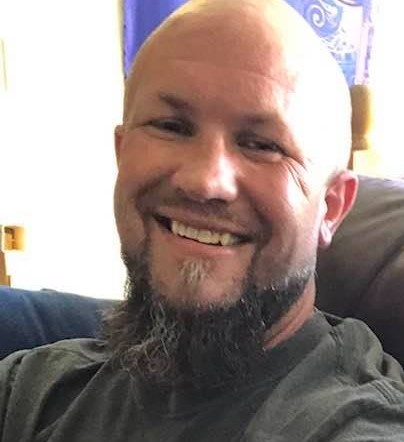 Brandon lived many places growing up; he spent time in Utah off and on, living with his aunt, uncle, and cousins for a time, spent occasional summers in Las Vegas, lived with his dad in Memphis and his grandparents in Idaho. After graduating from Wooddale High School in Memphis, TN he joined the Marine Corps at 17 where he became a F18 jet engine mechanic in the VMFA-115 squadron (Silver Eagles). From 1993-1997 Brandon dutifully served his country in many places including South Carolina, Alaska, Florida, Iwakuni and Okinawa.

After being honorably discharged from the Marines, Brandon worked in many industries including restaurants, banking, construction (owning his own dump trucks), and crude oil (owning his own trucking company). Brandon was a Master Mason in the Wasatch Lodge and a member of the Marines Motorcycle Club.

Brandon married Laura a little over 10 years ago on December 5, 2009 and they have called Stansbury Park home for the majority of their marriage. Brandon adored their 3 fur babies: Bixby, Yoshi, and Sadie. Besides riding his motorcycle, Brandon shared Laura’s love of rocks and crystals. He also enjoyed flying his flight simulator and wished that he could have been a pilot. Brandon loved to share his knowledge with others and often made connections between people. He loved making people laugh and smile.

Brandon was an amazing man and despite his struggles would give everything he had to those who had none. He had the biggest heart and helped so many people in every walk of life. He had big dreams of the future in helping others, especially veterans. In his 44 years he lived many lifetimes and he will be missed by so many.

Brandon was preceded in death by his parents, Jan Harper and Norm Larsen, brothers Tyler and Jared, and grandparents Harper and Larsen. He is survived by his wife Laura, brothers Jeremy and Josh, sister Julie (Ryan), step mom Joanne, and many aunts, uncles and cousins.

A memorial service will be held in his honor on Friday, June 19th at 7pm at the Stansbury Park Clubhouse (1 Clubhouse Drive, Stansbury Park, UT). A short reception will follow. Those unable to make it in person can watch via Facebook live, more details can be found at: https://www.facebook.com/events/568107267237447/?active_tab=about .  In lieu of flowers, the family is asking for donations to the Brandon Larsen Memorial Foundation that will assist vetarans in need: https://paypal.me/pools/c/8pWn0dZUdj?fbclid=IwAR2F-S4sqbDK70xf20Gqg6cCy95se6GPVVPJcNYMOTc3SuaNqyNTAIsuJok .

To order memorial trees or send flowers to the family in memory of Brandon Larsen, please visit our flower store.
Send a Sympathy Card