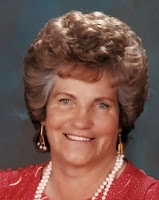 1921-2013
Bernice Bleazard Castagno, age 92, passed away Dec. 5, 2013. Bernice was the daughter of George H. and Blanche Miles Bleazard. She was born Nov. 10, 1921 in Duchesne, Utah. She was the fifth of ten children. She lived most of her youth in Lakepoint and attended school in Grantsville where she met her beloved Albert John Castagno. She and "Ab" were married June 9, 1941. Their marriage was later solemnized in the Salt Lake Temple. When Bernice and Ab were first married, they lived in a sheep camp. They were blessed with four children, William B., Patricia (Chatwin), Robert J., and Carolee (Renberg). At age 14, Bernice started driving her siblings and mother everywhere and at age 91, she still loved to drive. She was an active member of the LDS Church and held many callings. Two of her favorite callings were mutual president and a counselor in the Relief Society presidency. She worked many years in the Salt Lake Temple. Bernice loved to crochet and bake. She was a great cook! One of her greatest joys in life has been delivering her home-baked "goodies" and homemade items to friends and family. Bernice was a hard worker. She worked at the BlueBird in Grantsville for Sterl Halladay. She also assisted Lynn Strickland at his beauty salon. She loved to work in her yard. She is survived by three of her four children, Bill (Carolyn), Pat (Alan) Chatwin, and Bob (Phyllis). She is also survived by two sisters, LaVon Ison of Bloomington, Indiana and Sandra Outzen of Tooele, Utah. She was preceded in death by her beloved husband Albert and her daughter Carolee Renberg. She was the proud grandmother of 15 grandchildren and 59 great-grandchildren. She had one great-grandchildren. A bright and shining light is no longer in our lives. There will be a viewing Monday Dec. 9 from 6-8 p.m. at the Grantsville Stake Center, 550 East Durfee. There will also be a viewing prior to the funeral from 9:30 to 10:30 a.m. on Tuesday Dec. 10 followed by the funeral at 11:00 a.m. This will also be at 550 East Durfee. Interment will be at the Grantsville City Cemetery following the funeral. Services entrusted with Didericksen Memorial, 435-277-0050.
To order memorial trees or send flowers to the family in memory of Bernice Castagno, please visit our flower store.
Send a Sympathy Card