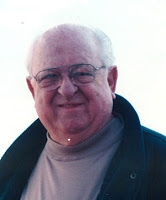 
Albert Frank Ogden died June 5. He was born March 9, 1926 in Hempstead, Long Island, N.Y., to George Milton and Florence Grogan Ogden. He was the third of six boys. He entered the US Naby in February 1944 and served in WWII, Korea and Vietnam. His sea assignments took him from Alaska, through the Panama Canal (4 times) to Aruba. He was active in putting troops ashore in Inchon, Korea, and the evacuations at Wonsan and Hungnam during the Korean War. Basho and Yokosuka, Japan, were his overseas assignments. DeNang, Vietnam, was his last overseas assignment where he worked with civilian personnel. His shore duty assignments hee was most proud of were NROTC Instructor at the University of Nebraska and the assignment at the Post Graduate School, Monterey, Caif., which was cut short when he was transferred to Dugway Proving Grounds where he met Betty Nelson of Grantsville. They were married in 1963. He retired from the Navy in August 1966 as a Chief Petty Officer. He retired from the Tooele Army Depot in 1986 where he served as the Chemical Surety Training Instructor. He enjoyed being associated with the founding and growth of the Oquirrh Hills School, the Mental Retardation Association of Utah, and the state and local VFW posts. He was on the crew that worked for the Grantsville Little League that went all the way to win the championship. He also enjoyed working in the yard, reading about military history, completing the daily crossword puzzle, the first snow fall, playing with Candace and seeing his friends “downtown.” He loved the Navy and was proud of his service. He is survived by his wife, Betty Nelson, and children Bradley and Candace; Rita Morgan (Dave), San Francisco; and his brothers Raymond (Mary) of Atwater, Calif., and Milton of Fresno, Calif. Funeral services will be held Tuesday, June 11 at 11 a.m. There will be a viewing at 9:30 a.m. until 10:30 a.m. prior to the service at the Grantsville LDS West Stake Center located at 115 E Cherry St. Interment will be at the Grantsville City Cemetery. Services entrusted with Didericksen Memorial, 435-277-0050.
To order memorial trees or send flowers to the family in memory of Albert Ogden, please visit our flower store.
Send a Sympathy Card